INSTITUTE OF SOIL SCIENCE AND Academician Arif Hashimov: “Special duties are assigned to the enterprises of the division of Biological and Medical Sciences in the implementation of restoration and construction works on the liberated territories”

On March 1, the acting president of ANAS, academician Arif Hashimov met with the general directors, executive directors and scientific secretaries of the scientific institutions of the division of Biological and Medical Sciences (DBMS) of the Academy.

Opening the event, academician Arif Hashimov said that the Division of Biological and Medical Sciences is one of the most important departments of the Academy for the priority of scientific directions, number of scientific institutions, quantitative and qualitative indicators of scientific research carried out, as well as personnel potential. According to the academician, Biological and Medical Sciences have become the top priority in connection with a number of social, economic, demographic, environmental and anthropogenic processes occurring in the world at present.

He also said that the coronavirus pandemic has created a number of new socio-economic, geopolitical, spiritual and psychological realities and has once again made biological and medical sciences relevant at all levels: "Research on vaccination, which has made the pandemic relevant for science, is redefining the concepts of science-ethics, science-humanism, science-justice at a new level. It also actualizes the mutual multidisciplinary relationship of natural sciences and humanities and social sciences at a new level in the world”.

Academician Arif Hashimov spoke about the complex application of molecular biology, molecular genetics, bioinformatics, systemic biology and other technologies to life processes on the modern problems of the development of biology, medicine and agricultural sciences in Azerbaijan and brought to the attention that research is being carried out in this direction. He also spoke about global climate changes, the problem of food security related to it, the development of science related to agriculture in order to eliminate this problem.

The speaker noted that the implementation of restoration and construction works in the liberated territories is one of the main priorities of the state policy and in this regard, special responsibility falls on scientific institutions and organizations of the Division of Biological and Medical Sciences: “Assessment of the scale of the ecological disaster committed by the Armenian occupiers in the liberated territories, monitoring of the bio-geoecological condition of the region, a comparative complex study of the biosenoses and biodiversity of the liberated territories before the occupation, conducting research on introduction and reintroduction of rare and endangered plants, reproduction of plants by biotechnological methods for the restoration of comprehensive studies should be carried out on the development of scientific bases for the restoration of agriculture in the liberated territories, creation and application of more productive plant varieties and animal breeds corresponding to the relevant soil-climatic conditions”.

At the end of his speech, academician A.Hashimov wished success to employees in the implementation of the tasks facing the enterprises of the division in terms of the world's challenges and socio-economic needs of the country.

Then, vice-president of ANAS, chairman of the Scientific Council of the Division of Biological and Medical Sciences, academician Irada Huseynova said that today the students of the academician Jalal Aliyev school work at the departments of the Division and the employees of the DBMS have rich scientific potential. He noted that XXI century is the century of biology, life sciences, biotechnology, which places serious responsibility to scientific institutions and scientists of DBMS. Academician Irada Huseynova said that today the country's leadership pays great attention to our science and stressed the need to work diligently to realize the tasks set by President Ilham Aliyev before scientists.

Noting that a number of reforms were carried out in the institutions of the Division and special attention was paid to the training of young people, 25 out of 15 doctoral students of ANAS studied abroad fell to the share of DBMS, she said that today the young doctoral students of the Division are grew up as professional specialists in Oxford, Birmingham, Montpellier, etc universities.

Touching upon the work done to conduct scientific research in the liberated territories of Karabakh, the chairman of the Scientific Council of the Division, at the same time, noted that DBMS scientists conducted important research in the framework of the “Action plan for 2020-2022 on ensuring the efficient use of water resources” and in the direction of problems of water level reduction in the Kura River.

Informing about the preparation of the third edition of the “Red Book”, academician Irada Huseynova said that the Institutes of Botany, Dendrology, Zoology, Central Botanical Garden, Nakhchivan and Ganja Departments of ANAS continue their activities in this direction with the participation of experts from the Ministry of Ecology and Natural Resources.

Touching upon the new realities created by the coronavirus pandemic, the speaker said that vaccines created in the world have already given a positive result, as well as the vaccine prepared by corresponding member of ANAS Tarlan Mammadov has been included in the list of the World Health Organization. In this regard, it is planned to hold a scientific seminar at the Academy with the participation of specialists from ANAS, Management Union of Medical Territorial Units (TABIB), Ministry of Health, Medicine and Azerbaijan Medical University.

In addition, the department is responsible for cleaning contaminated lands, longevity, healthy aging, food security, biosafety, studying the bioresources of the Caspian Sea, etc. he gave information about the important researches carried out in the fields.

At the end, academician Arif Hashimov noted the importance of preserving the scientific potential of the enterprises of the department and said that some of the proposals voiced at the event would be included in the project of the newly developed “Strategy for the development of Azerbaijani science” and wished success to the employees of the DBMS.

The Laboratory of Soil Geographic Information Systems has submitted its final report for 2021. 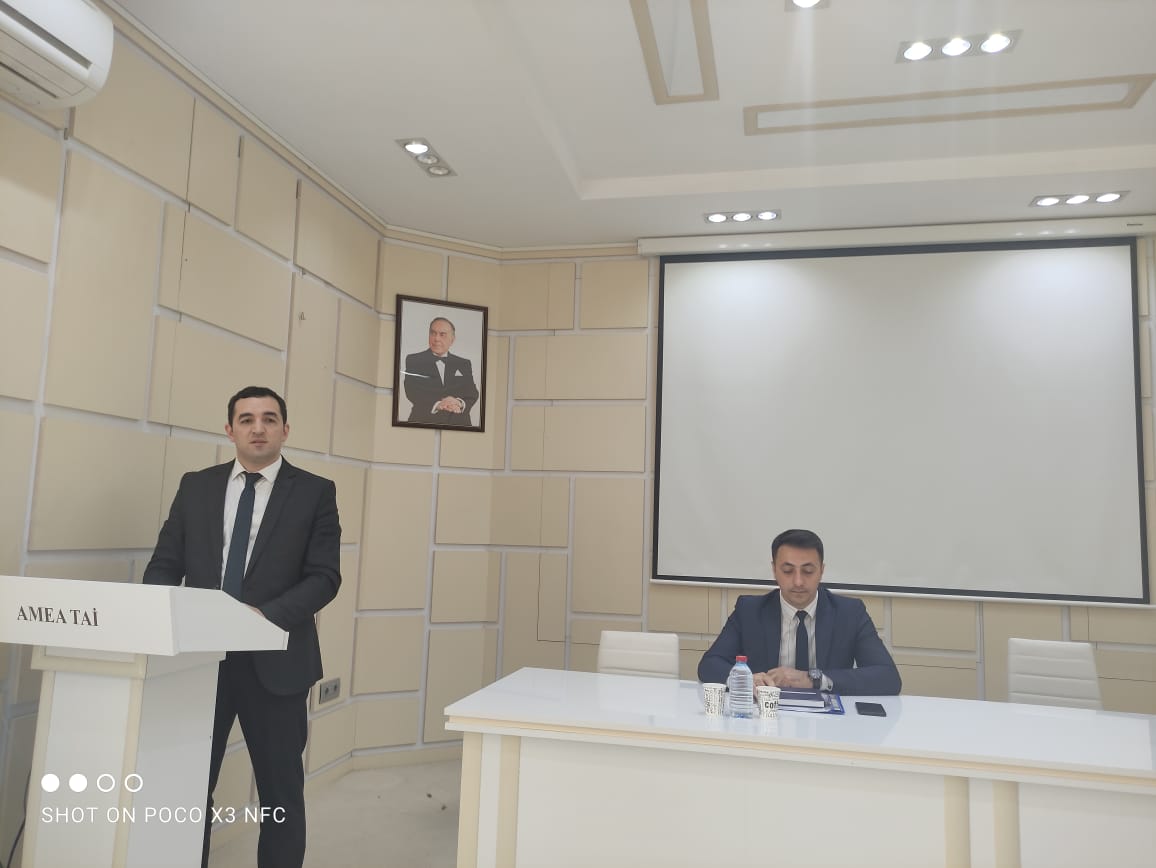 The next meeting of the Council of Young Scientists and Specialists was held at the Institute of Soil Science and Agrochemistry of ANAS.

The Department of Agroecology and Land Valuation, the International Laboratory of Soil Ecology presented the final report for 2021.

Academician Arif Hashimov: “Special duties are assigned to the enterprises of the division of Biological and Medical Sciences in the implementation of restoration and construction works on the liberated territories” 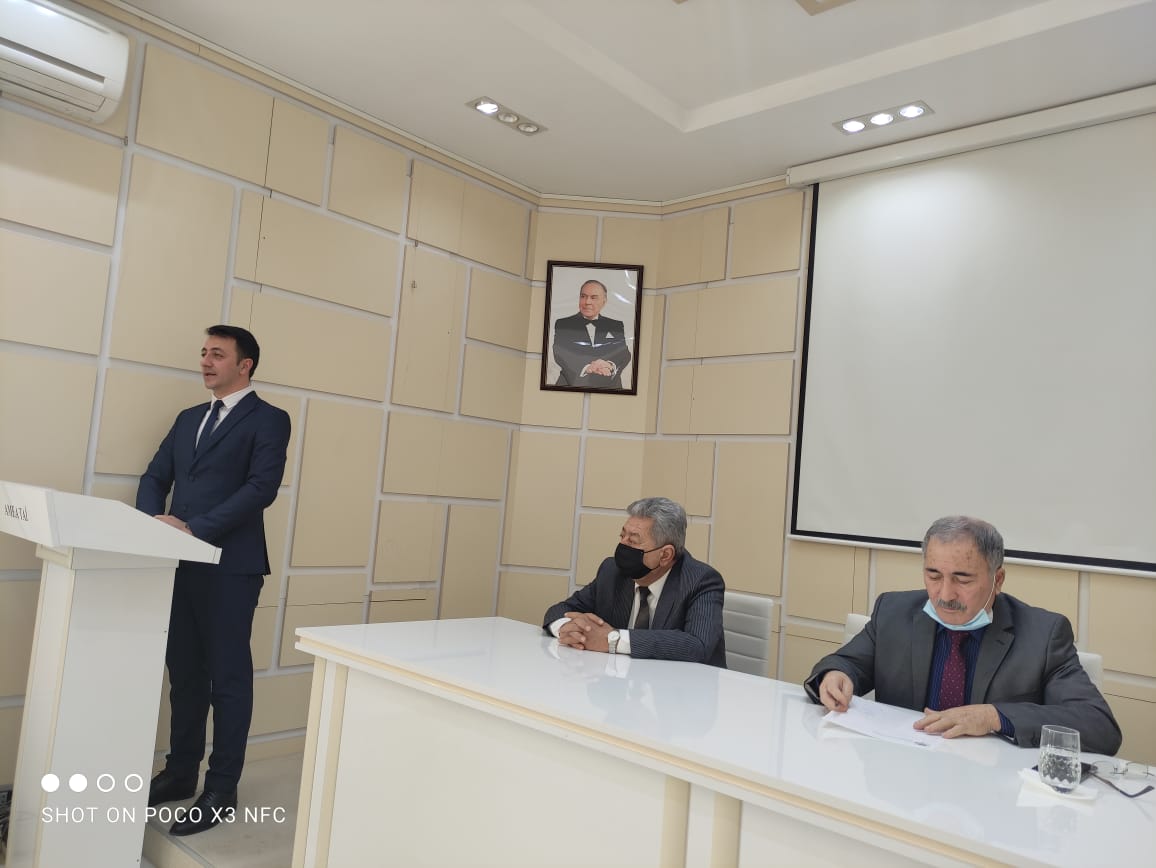 The meeting dedicated to "Youth Day" was held at the Institute of Soil Science and Agrochemistry. 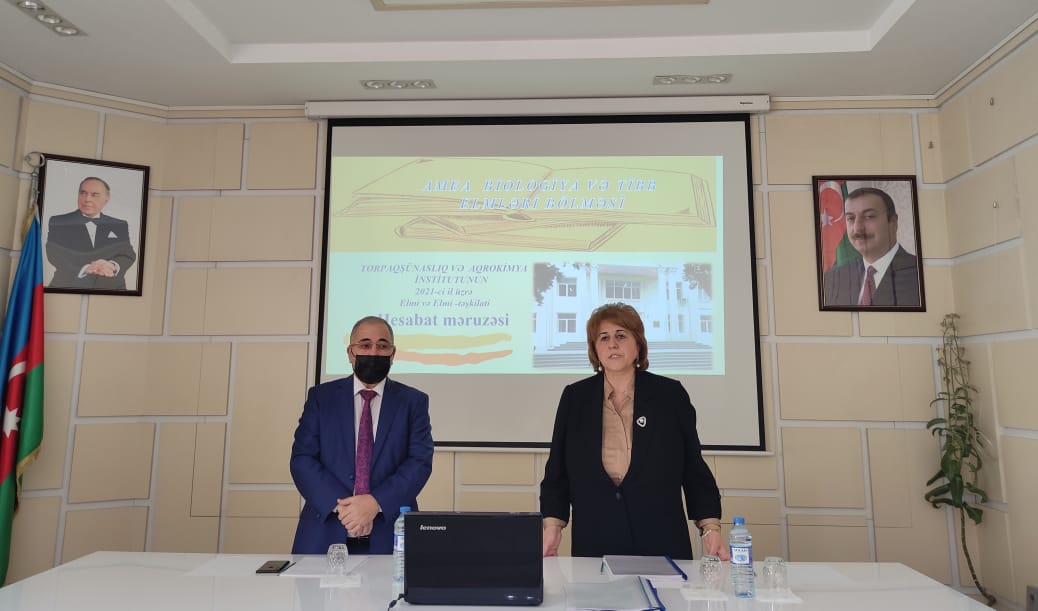 The joint meeting of the Department of Biological and Medical Sciences of ANAS and the Institute of Soil Science and Agrochemistry of ANAS was held. 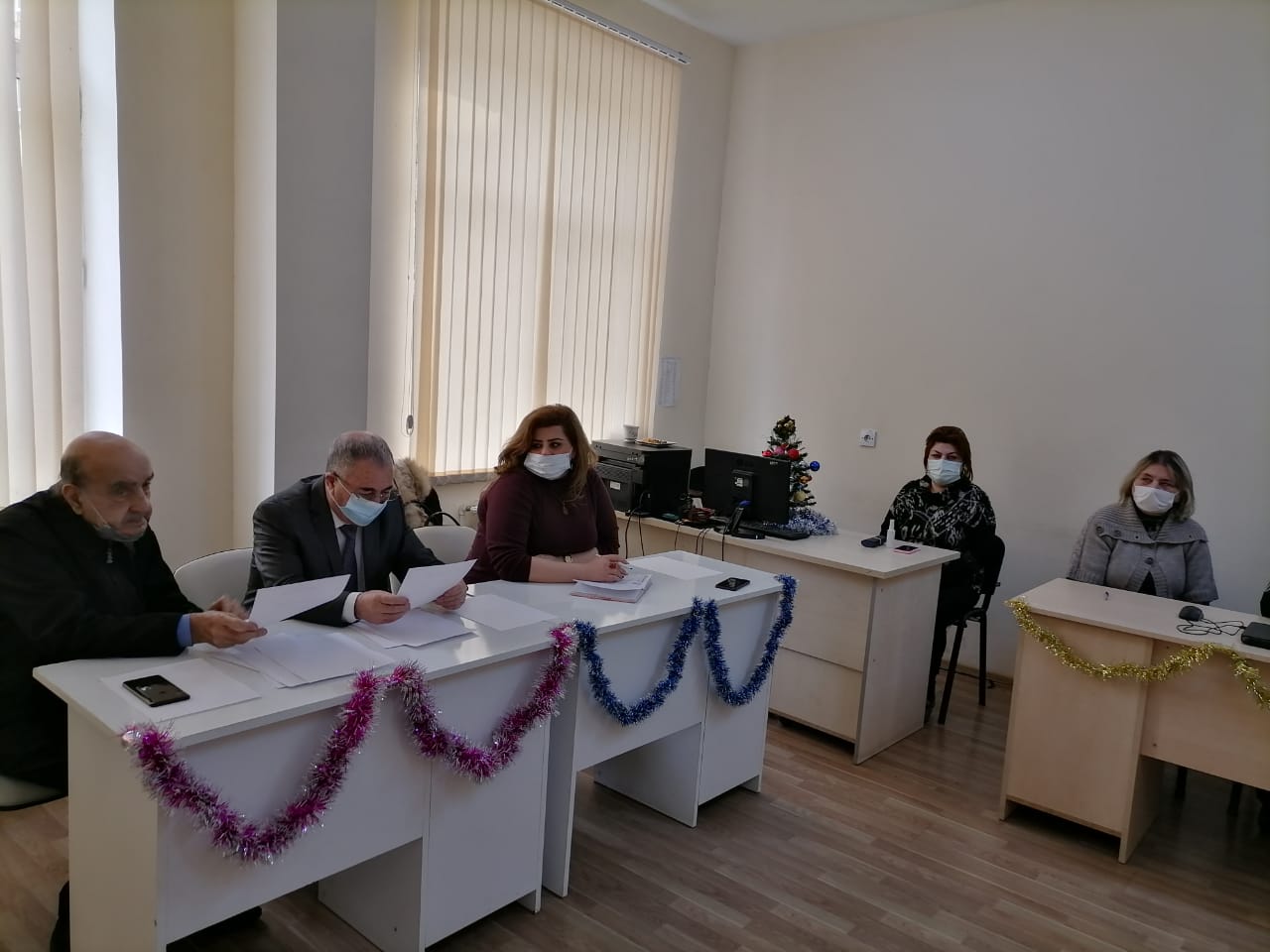 The winter examination session for doctoral students was held at The Institute of Soil Science and Agrochemistry of ANAS. 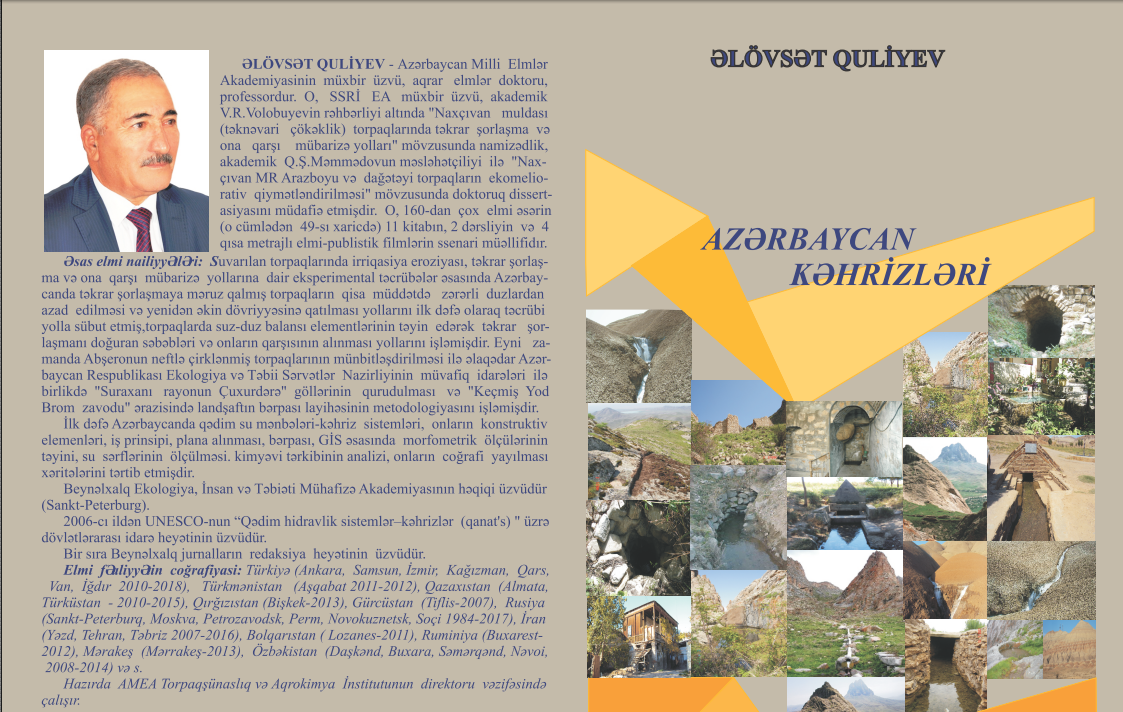